The bells of St John’s Sharow

Sadly the bells of St John’s are silent. Covered in pigeon guano. Unsafe to ring.

To help us get he bells ringing, please visit our Just Giving page Appeal for a Peal campaign page.

In 2024, it is 200 since the first 6 bells were cast and by then we hope to put a band together and attempt a peal to celebrate.

The church tower contains eight bells. Six were cast by John Mears in 1824 and two smallest bells, cast by Warner’s in 1871, were added it that year.

The first Peal rung after the augmentation of bells from 6 to 8, was on Friday 26th December 1873. 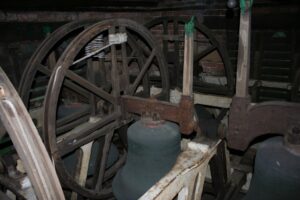 On the south wall of the Tower Room is a plaque reading: 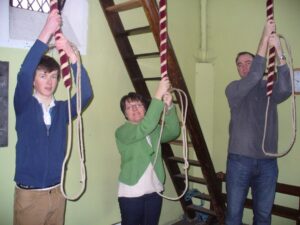 In March 2012 our Tower Captain was James then aged 14, shown here with Jane and John getting ready to ring.

By August 2015 the ringing team included learners aged 9 and 56, through to members who could ring peels. We regularly held practice nights with ringers from nearby Kirklington, and hosted Regional Competitions and visiting bands.

In 2017, following an appeal for funds, a flower vase was renovated, to mark the grave of Ted Hudson, a local stalwart of the bellringing community. Having died in 1979, it was unknown why his grave was unmarked, but a plaque found in a draw lead to an investigation about his life. Edward Hudson started bellringing at St John’s, Sharow and became a member of the Yorkshire Association of Change Ringers in 1929. He served as a member of the Central Council of Church Bell Ringers for many years, representing the Yorkshire Association. There was a lot of support to recognise Ted’s work and burial place. A record of his life as a bell ringer and the plaque are displayed in the bell tower.

2018 saw a team of 4, ringing once a month at Sunday service. We welcomed visiting bands, including University groups, the Yorkshire Tykes and social ringers on tour in Yorkshire.

In 2020 the tower was shut. The bells covered in pigeon guano, unsafe to ring and The Sharow Bells Restoration : Appeal for a Peal was launched.

It is our hope to renovate the bells by 2024, in time to attempt a peal to celebrate the 200th anniversary of the bells casting.

Donation to the Appeal can be made to our JustGiving page Appeal for a Peal campaign page.

If you are a ringer from a bell tower that likes eating cake, please get in touch and one of St John’s Bell Ringers, would love to visit your tower and bring cakes in exchange for a donation.